In December of 2017, patients, researchers, government officials, policymakers, and clinicians celebrated the first anniversary of the passing into law of the 21st Century Cures Act, which our founder Doug Oliver, MSW played a pivotal role in helping to bring about alongside Tennessee Senator Lamar Alexander.

“Nashville resident Doug Oliver has been an advocate for regenerative medicine," Senator Alexander wrote in The Tennessean. "Doug was blind for more than a decade before doctors used stem cells from his hip and injected them into his eye and miraculously restored his sight. He has traveled to Washington multiple times to share his story and even helped my staff craft pieces of this legislation.”

The emergence of regenerative medicine as a new paradigm of healthcare brings a need for rapid, decisive response to change. This is reflected in the way research is conducted, medicine is practiced, drugs are developed, and patients are healed.

The Regenerative Outcomes Foundation serves both regenerative medicine patients seeking healing, and the providers that help to achieve it. Doug’s emerging role in policy and resource development continues to expand in influence and scope, now largely being continued under the mission and vision for the Foundation. We are in our first year of operations, spreading news, knowledge, and awareness.

Later this month, Doug will be a featured panelist at the 2018 World Stem Cell Summit, in Miami, Florida where he will speak as a patient expert for two events:

In addition to speaking, he will debut his innovative model for precision informed consent, as well as a theory-based framework for specialized counseling services at the event’s poster session. This month is also a month of tremendous excitement for the Regenerative Outcomes Foundation because we’re publishing the first piece of a unique new project, the “Pioneers of Hope” Interview Series: an in-depth look at the passion and motivation that drives top influencers in the Regenerative Medicine field, including researchers, legislators, policymakers, patients, researchers, clinicians, bioethicists, lawyers, industry leaders, and more.

The Pioneers of Hope Interview Series will include monthly or semimonthly personal interviews we have designed with one thing in mind: offering hope and inspiration to patients. for patients.

PIONEERS OF HOPE: Doug Oliver's Interview of Dr. Francis Collins, Director of NIH, for the Regen 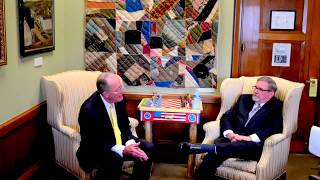 An Ambassador In Your Corner